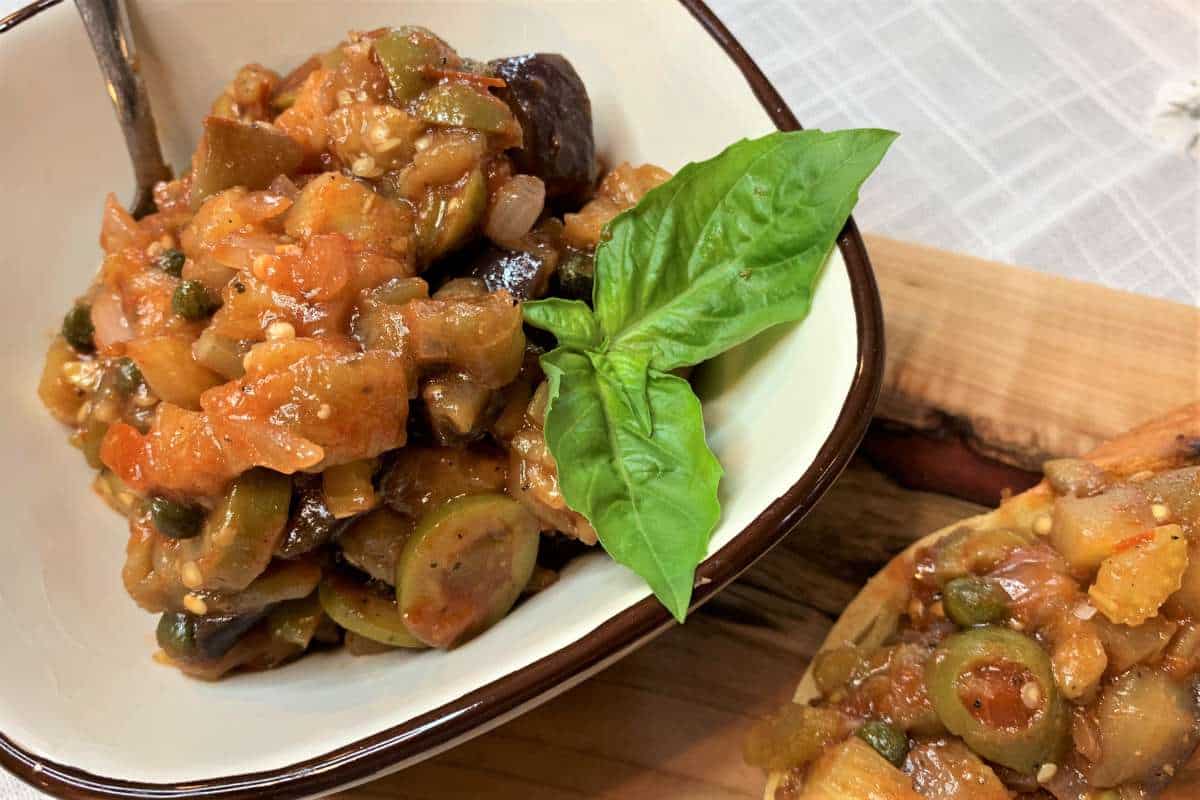 Homemade Sicilian eggplant caponata is delicious served as an appetizer with crostini or as an accompaniment to chicken or fish. It is a blend of eggplant, olives, celery, tomato, and capers. The bold flavors of these simple vegetables are heightened and complemented by the sweet and sour “agrodolce” sauce that it is cooked in.

Over time the flavors meld and intensify which makes it wonderfully complex. You will find that caponata is a perfect make ahead appetizer, relish, or accompaniment for any meal.

It makes a simple meal

Caponata has always been a staple in our house. Growing up, Saturday was my mom’s day to bake bread. The bread would be coming out of the oven just in time for lunch. She would open a jar of homemade caponata and set it on the table with that wonderful warm bread. It was the simplest meal, but it was unbelievably good and so satisfying. It really does not get any better than this!

Think of this as a Sicilian version of ratatouille or a chunky relish in a tangy sauce. As with much of Sicilian cuisine, caponata has influences from many different cultures including the Spanish, Arabic, Greek and French. Recipes for caponata date back to the early 1700 and there are different stories of how the recipe came to be.

One claim about it’s origin, is that it was originally served alongside a fish that is plentiful in Sicily called a “Capone”. The less affluent Sicilians could not afford the fish, so they substituted eggplant. Another claim is that the word caponata derives from the Latin word “caupo” which means tavern. This version contends that this was a dish that was often served in taverns that sailors frequented. A history of the Sicilian Caponata by Clifford A. Wright and Italy Magazine have some interesting stories about caponata’s history.

Regardless of it’s origins, today there are more than 37 different versions of caponata, stemming from the different areas of Sicily. Variations of the recipe might include honey, pine nuts, raisins, peppers, or zucchini. Others go as far as adding in octopus or pepperoni. My mother’s recipe is very basic and would lend itself nicely to experimenting with some of these other ingredients.

How to Serve Sicilian Eggplant Caponata

My family recipe is quite simple and very versatile. Caponata pairs perfectly with toasted bread as an appetizer, but it also makes a wonderful accompaniment to fish, pork, or chicken.

As I mentioned earlier, caponata gets better as it sits overnight, making it the perfect make ahead dish when you are entertaining. I find it is best when served at room temperature, but I often eat it straight out of the refrigerator, and it is still excellent. If you want to serve it the same day that you make it, I suggest allowing it to sit at room temperature for at least an hour. This will allow the flavors to develop.

How to make this appetizer

The eggplant can be peeled but it does not need to be. The peel will soften while cooking. Cut the eggplant into similar bite size pieces so that they cook evenly and are easy to eat. Once it is cut, salt it and place it in a calendar over a bowl while you prepare the rest of the vegetables. The salt will draw out the excess liquid and ensure that it does not become soggy during cooking. It also helps to tenderize the eggplant resulting in a creamy texture.

Add two tablespoons of olive oil to a frying pan and sauté the eggplant until it is tender and golden brown. Transfer the eggplant to a mixing bowl and set aside.

Add 2 tablespoons of olive oil to a frying pan and sauté the vegetables for two minutes. Mince the garlic and add it to the celery and onions. Cook until they are tender.

Add the vinegar and sugar to the pan and allow it to reduce by half. Stir in the crushed tomatoes and cook for an additional 2 minutes.

Transfer the cooked vegetable mixture into the bowl with the eggplant. Add the capers and olives and stir to combine. Salt and pepper the caponata to taste. Refrigerate overnight in an airtight container or set it at room temperature for at least 1 hour before serving. 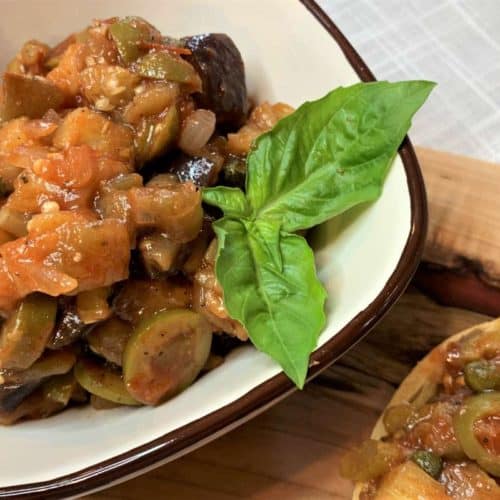 Bite size chunks of eggplant, onion, celery, olives, capers and tomato are cooked in an "agrodolce" sauce and served at room temperature as an appetizer or an accompaniment to chicken or fish. The bold flavors of the vegetables and the sauce develop into a savory, sweet and sour combination that gets better over time.
5 from 1 vote
Print Recipe Pin Recipe
Prep Time 30 mins
Cook Time 20 mins
Resting time 1 hr
Total Time 1 hr 50 mins
Course Appetizer, Salad, Side Dish
Cuisine Italian, Sicilian
Servings 3 cups
Calories 374 kcal