Flaky Cannoli Shells Made From Scratch

Cannoli shells are a pastry that my mother makes often. Her cannoli shells are delicate, crispy and flaky. I guarantee that there is nothing quite like these delicious pastries for holding a deliciously sweet ricotta filling. Make classic Sicilian cannoli with my cannoli filling recipe.

Cannoli (cannolo for singular) are probably the most widely recognized Sicilian dessert in the world. And rightfully so, because they are unbelievably delicious and truly special. They are tube shaped pastry shells which are traditionally filled with a sweetened ricotta cream. I don’t think we have every had a holiday or a celebration, where cannoli where not the centerpiece of the dessert table.

Are cannoli hard to make?

When made from scratch, cannoli are a true labor of love. That is why they are usually reserved for a special occasion. But they are sooo worth the effort. Of course you can purchase premade shells from a bakery or the grocery store, but they are just not the same. Homemade shells are much more delicate and flaky then the store bought version.

What ingredients do you need to make the shells?

The ingredients for our homemade shells are pretty simple

Flour: We have always used all purpose flour for this recipe.

Lard or Shortening: The fat is what you want here. This is what makes the shells so flaky and crisp.

Sugar: Just enough to give the shells a little sweetness.

Beer!: Our favorite lager is our secret ingredient! Traditionally wine is used in the dough, but years ago my grandmother and her friends starting using beer and we find that it provides just the right amount of acid and a little yeast to help the bubbles form. Don’t worry you won’t taste the beer at all.

Egg white: You will use this for sealing the shells

Vegetable Oil: You will need enough to be able to fry the shells. The shells will float to the top when the bubbles start to form so make sure that there is enough oil in your pan to completely cover them and allow them to move freely.

Pasta machine: If you have a pasta machine it will make the process of rolling the dough very easy.

Cannoli tubes/forms: Cannoli tubes are available in bakery supply stores or on line. Before these aluminum forms were available, my Nonna would use wooden dowels and they still came out perfect.

4-5″ round cookie cutter or a empty coffee can: This will give you the round shape and the perfect size to fit the tubes.

Tongs: Use long enough tongs so that you can remove the cannoli from the oil without burning yourself.

Heavy bottomed sauce pan: The pan you use to fry the shells in needs to be deep enough for frying the cannoli shells.

A cookie sheet line with paper towels: Set this close to your cooking area so you can quickly transfer the cannoli onto the paper towels to cool. The paper towels will absorb the excess oil from the shells.

How to make the shells

Using your hands, work the lard into the flour until it is fully incorporated and you have created a meal like texture.

Add the sugar and stir to combine.

Add the Beer and work with your hands until a ball forms. Separate the dough into several smaller pieces.

Knead the down for several minutes until it is somewhat smooth and no longer tacky. You may need to use a little flour while kneading.

Cut the dough balls into small sections and roll them out very thin (to about 1/8″ in thickness). If using the pasta machine, pass the dough through starting at #1 and working your way to #4 in thickness.

Cut the dough into 4″ rounds using the cookie cutter or coffee can.

Wrap the dough around the cannoli tube and seal with the egg white.

Drop several prepared cannoli tubes into the hot oil. Don’t overcrowd the shells in the oil. Cook for several minutes or until the shells are golden brown.

Remove the shells from the oil and set on paper towels.

Allow to cool completely before storing or filling.

Dip the ends of the cannoli in melted chocolate. Place the chocolate dipped shells on a cookie sheet lined with waxed paper and refrigerate them for about 20 minutes before attempting to fill the cannoli.

Dip the ends of filled cannoli in finally chopped pistachios or add a bit of maraschino cherry or candied fruit.

Try a different type of filling such as a cream cheese and whipped cream combination or a peanut butter and cream cheese filling.

Sprinkle your filled shells with confectioners sugar to finish it off and enjoy!

Traditionally, cannoli shells are filled with a ricotta cream, which would not be dairy free, although this recipe for the shells does not contain any dairy.

How do you store cannoli shells?

These shells should be stored in an airtight container which is lined with paper towels. Place paper towels between layers of shells as well. The paper towels will absorb some of the oil from the shells and keep them crispy. If you change the paper towels about once a week or so, the shells will stay fresh for several weeks.

Can you freeze cannoli shells?

I would not recommend freezing the shells. I have never tried it and could not guarantee the results. 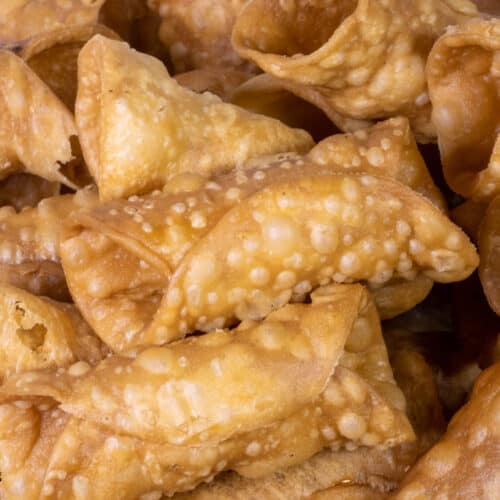 Flaky Cannoli Shells Made from Scratch

If you don’t have a frying thermometer, you can test the temperature of the oil by dropping a small piece of dough into the pan. The oil is ready when air bubbles immediately form outside dough. An empty coffee can be used to in place of the 4″ cookie cutter. The nutritional values for this recipe are an estimate.

2 thoughts on “Flaky Cannoli Shells Made From Scratch”