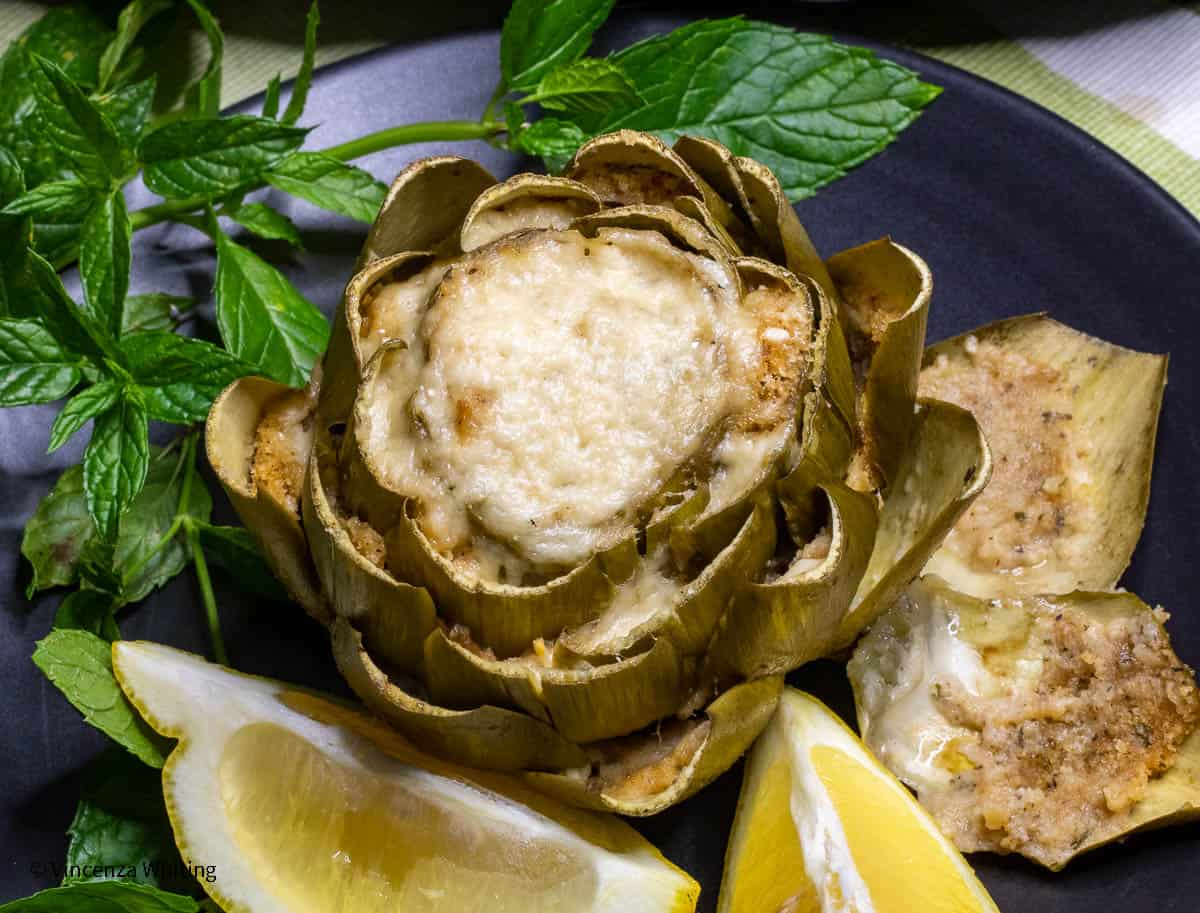 Last Sunday we had Stuffed Artichokes, Made Sicilian Style. This is one of the tastiest ways to make this uniquely wonderful vegetable. The stuffing is primarily made up of onions, bread crumbs and pecorino romano cheese and topped off with a pinch of dried mint. The combination really brings out the sweetness in the artichoke. We were literally licking our fingers by the time we finished eating.

To many people artichokes are a bit intimidating to eat let alone prepare. In reality they are easy to cook and yes they are a little messy to eat…but they are so worth the effort and extra napkins!

What is an artichoke?

The artichoke is part of the thistle family. It has been cultivated from another Italian favorite, the cardoon (which we will cook on another day). Varieties of artichokes were cultivated in Sicily and then shared with the northern Italian regions, France and Spain. The artichoke itself is actually the flower bud of the plant before the flower blooms.

This special vegetable is revered in Italy, especially in Sicily. To Italians artichoke season is the best time of the year. They are most abundant during the spring months. We were lucky enough to have been in Sicily during the spring of 2019 and enjoyed eating some of the largest artichokes I have ever seen.

How to Make Stuffed Artichokes

Artichokes: Make sure that the artichokes are nice and green and that the leaves are not dry or shriveled.

Pecorino Romano cheese is my favorite to use, but you can substitute Parmesan or a combination of the two. The cheese bring a nutty saltiness to the filling.

Bread Crumbs: Either seasoned or plain will work fine.

Olive Oil: Use your favorite olive oil. The olive oil will add flavor and adds moisture to the filling so I do think that it is a good idea to use a brand that you like.

Lemon: You will use this to rub on the artichokes so they don’t discolor before cooking.

How to prepare them

How to cook them

Artichokes are in season and their tastiest in the spring. There is a smaller artichoke season again in early fall.

Try to select artichokes that are about the same size so that they cook evenly and are done at the same time.

Start by rinsing them off in cold water. I like to spread the leaves out a bit and let water run between them. Just be careful because the needles at the top of the leaves are sharp. Then hold them upside down to drain any trapped water out of them.

Stuff the Artichokes on a cutting board or a rimmed baking sheet so that you can reuse any stuffing that falls out as you are preparing them.

Watch the artichokes as they cook as the water may start to evaporate and you may need to add more.

How do you eat an artichoke?

As you get closer to the center the leaves will become softer and more of it will be edible. Once you get to the center you will find the choke which is the fuzzy filament of the artichoke and covers the heart. The choke is not edible in a mature artichoke, so go ahead and spoon it out. Now you have reached the heart, which is your prize for all the work you did to get this far. It is tender and sweet and well worth the effort!

How do you know if an artichoke is bad?

Fresh artichokes will be a nice green color with firm leaves. If the artichokes have dark or dry looking leaves then it is past it’s prime. You can still eat it as long as you remove all of the dark outer leaves before cooking it.

How do you serve artichokes?

These stuffed beauties can be served as an appetizer or as a side. They go great with a dipping sauce or dressing, but they don’t need it. Artichokes are a tasty accompaniment for chicken, fish, pork or steak.

Other recipes you will enjoy

Italian Chicken with Peppers and Onions 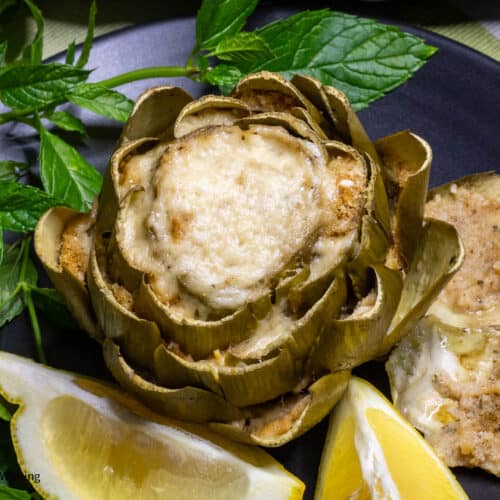 Artichokes Made Sicilian Style Stuffed with Onion and Cheese

Artichokes are stuffed with onion and cheese then poached until tender. The result creates a savory topping that brings out the sweetness in the artichoke.
5 from 1 vote
Print Recipe Pin Recipe
Prep Time 10 mins
Cook Time 30 mins
Course Side Dish
Cuisine Italian
Servings 4 servings
Calories 220 kcal