Can you think of a better dessert then Homemade Peanut Butter Pie Brownies?  I certainly can’t.  Two of my favorite desserts combined into one.  This is simply my favorite brownie recipe topped with a thick layer of my favorite peanut butter pie!  It doesn’t get much better than that!

There is no mistaking that brownies and peanut butter pie are two of America’s most popular desserts and for good reason.  Brownies have been around since the end of the 19th century and there are numerous claims as to who was the first to create them.  Did you know that we celebrate National Brownies Day on December 8.  We actually have a day devoted to brownies!  As for peanut butter, according to the National Peanut Board, Americans spend about $850 million on peanut butter each year.  So, I think it is safe to say that we really, really like it! So it just makes sense that we should combine the two to make what I think is the perfect dessert.

How to make this dessert

Make the base – homemade brownies

The brownies in this recipe are moist, fudgy, and perfectly chocolatey.  I am a chocolate fiend I admit it!  And I love brownies!  I especially love these brownies, because they are easy to make, and I only need to dirty one bowl.

I make the brownies first and allow them to cool while I make the peanut butter pie topping. Combine the flour, sugar, a little baking powder and cocoa powder in a bowl.  Next, add the eggs, vanilla and melted butter and mix them until ingredients are completely blended.  The batter is thick, but the brownies come out super moist and delicious!

This recipe is perfect for an 8×8 baking pan.  The key to making good brownies is not to over bake them.  They are ready when a toothpick inserted in the middle comes out almost clean. The toothpick should not be wet, but you don’t want it to come out completely clean either.  25- 30 minutes in a 350-degree oven works well for this recipe.

About the peanut butter topping

Once the brownies are out of the oven, I start the peanut butter pie topping.  It consists of cream cheese, peanut butter, milk, sugar, and whipped cream.  It comes out fluffy and light, which is how I like my peanut butter pie.  I prefer a subtle peanut butter flavor, but this recipe lends itself to a denser more “peanutty” pie simply by adjusting the amount of whip cream you fold into it.

Put it all together

When the brownies are completely cooled you can top them with this peanut butter dream, I mean cream! Cover the pan with plastic wrap and refrigerate it for at least 2 hours before serving.  This allows the peanut butter pie topping to set.  When you are ready to serve it, cut into squares and remove from the pan with a spatula.  You can cut this easily with a serrated knife.

I like to serve this with a little chocolate syrup when I have it handy or chunks of cut up chocolate peanut butter cups.  And there you have it, the perfect dessert!

Want to try some other mouth watering desserts? 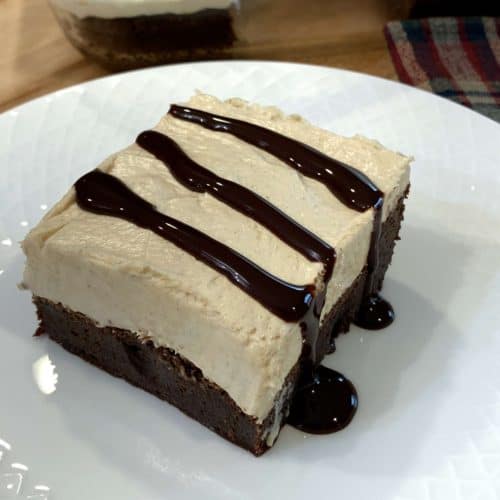 To make the Brownies