My husband John’s Long Island Iced Tea is the perfect cocktail to celebrate the end of the work week! It really takes the edge off and puts you into weekend mode! This is an incredibly tasty cocktail and it is so smooth you won’t believe how potent a brew this is. If you want something a little less potent but just as tasty, you will love our Tequila and Grapefruit Cocktail or give my favorite after dinner drink try, the Sicilian Kiss.

If you have never had a Long Island iced tea then I must warn you this is not tea at all. This cocktail is a combination of 5 liquors, a little sour mix and a splash of cola for color. Like I said no tea! I highly recommend that you consume Long Island iced tea with caution because it goes down very easy and can sneak up on you!

Origin of this cocktail

Long Island iced tea is so popular that there is a feud between New York and Tennessee as to the origins of the cocktail. One claim is that a man named Robert “Rosebud” Butt, created it as entry in a contest while working at the Oak Beach Inn in Long Island, NY. The other claim is that it was invented in Long Island, an island in the Holston River in Kingston, Tennessee during the prohibition, by an illegal liquor distiller named Charlie “old man” Bishop.

There are differences between the two versions of the drink. Most notably the use of whisky and honey in Bishops recipe. I am sure that both are good, but John’s Long Island Iced Tea is hands down my favorite. In fact, his version of this very popular cocktail is so good that he gets requests to make it at every party.

It really is simple recipe. John likes to start with a cup of ice in a large pitcher. Then he adds 1/2 cup each of vodka, white rum, triple sec, 3/4 of a cup of tequila, 1/4 cup of gin, 2 1/4 cups of sour mix and 1/2 cup of cola such as Coke or Pepsi. Stir and pour into high ball glasses filled with ice and enjoy!

If you are looking for some appetizer recipes to pair with this cocktail you may want to try one of these dishes: 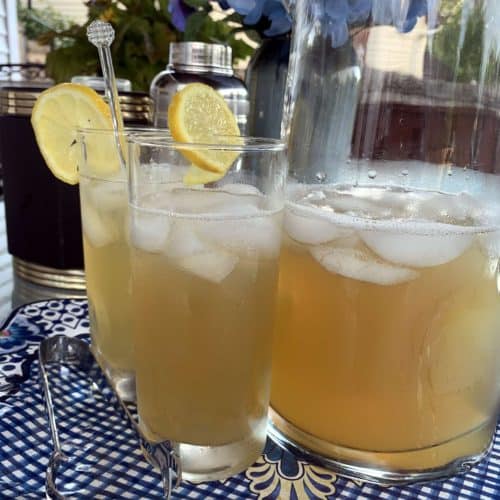 Long Island Iced Tea is the king of the cocktails! This is one easy going cocktail but don't let it fool you, this is one potent drink. A mixture of 5 spirits blended with sour mix and cola makes a perfect adult iced tea.
5 from 3 votes
Print Recipe Pin Recipe
Prep Time 10 mins
Total Time 10 mins
Course Drinks
Cuisine American
Servings 5
Calories 303 kcal